​​Drummer, composer, educator and perpetual student Audra Menconi continues to captivate and engage with a music and teaching career spanning over 35 years.  Her drumming and compositions reveal a passionate soulful spirit and a life full of musical influences with no boundaries.  Growing up in a family of non-musicians it was shocking when Audra pleaded for a drumset at the age of 7.  Before she even owned a drum she was playing along with recordings using"homemade" sticks and a set she constructed from buckets, lids, boxes, etc. Having  no instruction or influence other than the music she heard, she learned by listening and emulating. She was given her first full set at the age of 10 and by the time she was 14 began playing professionally. A local drummer and teacher (also Audra's percussion instructor) was moving out of town and looking for a replacement for his regular gig....so he called his 14 year old student of course!  Ironically this teacher only worked with Audra on percussion instruments and rarely gave attention to drumset. It just sat in the corner while they focused on xylophone scales and rudimental/orchestral snare drumming but she always wanted to be over there...on the kit.  Audra found out years later that he was (unknowingly) intimidated by her enormous curiosity and not confident in what he had to offer her on the set.  Audra knew that he had SO much to offer and wishes he had known that back then as well.   Audra tells this story;
"I was a freshman in high school and in my garage practicing with my 'garage band' when my Mom told me I had a phone call. It was my percussion teacher and he wanted me to come out to his regular Saturday gig and sit in/audition.  Only catch; my parents had to be with me 'cause I was way underage. I remember my band being so mad I left that day and ended up taking the gig. 'What do you mean you'll be gigging every Friday and Saturday from now on?!'   Well from that point on that's exactly what Friday and Saturday looked like for me. It began with this local country swing band and led to a new way of life  playing with countless musicians, styles, ensembles, and every musical genre I could (and couldn't) imagine,  in places I never imagined.  Many times I learned style and culture on the gig.  The fortunate thing about that first gig is they only had 3 requirements and it was all they wanted from this young drummer with lots of chops.  Four on the floor. Swing hard.  Keep time!  I learned so much from those guys. They were old enough to be my grandparents, and after a while they pretty much were! They became like family and eventually my parents let me go alone with them on out of town gigs.  A few years later I started freelancing and playing with anyone, anything, anywhere, anytime.  I can't think of a style, situation or circumstance I haven't worked.  I pretty quickly became a full time musician and student...maybe why it's so hard for me to be a regular gigging drummer now!  I may have worked too hard too young!  Either way, the relationship I had with this teacher was beautiful in so many ways as he was the first mentor to recognize and foster my gifts but he also had a huge influence on my teaching. Always learning,  learning to be humble,  and always giving back.  As he was moving out of town and offering me his gig, he also appointed me "teacher" of all the students he was leaving behind. I was terrified!  But he believed in me, encouraged and coached me, and continued to mentor me long distance during the process.  I started teaching with training wheels thanks to him!"

Around the time Audra began college she remembers her Mom saying to her often; "The better you get on the drums, the less I understand your music." And so she grew.
​It wasn't until undergraduate school that Audra was introduced to the "sound and language" of jazz and she was immediately captivated....the turning point that led to an endless/boundless journey of discovery; "the art of drumming," "the art of music." Studying the masters was always her path, so Audra was elated (and shocked) to be selected to attend a summer Jazz Program at The University of Massachusetts at Amherst to study with the late great, Max Roach. His recognition of her talent and close mentorship  helped flame the fire of confidence and determination already growing in this aspiring young drummer. At the end of the camp, Audra was selected as a member of the student quintet, Jazz In July Express, to open The Bright Moments Jazz Festival featuring Max Roach, Oliver Lake, Yusef Lateef, Shiela Jordan and The Billy Taylor Trio. Before the concert, Mr. Roach sat with her backstage and gave a priceless gift with his words of encouragement and validation. "These guys (other student drummers)  need to listen to the way you swing and feel the music." 10 students chosen for the camp, 9 guys  and 1 chick. Hell to the yes I'm ready! Bring it!
The entire experience further sparked the desire to channel all of her energy into music and drumming---as well as a commitment to offer a similar gift to others. Years later, Audra formed a Jazz Camp modeled after that program and has been fortunate to be able to inspire many young musicians.

After finishing undergraduate school with a BA in music, Audra moved to Boston, MA to study with legendary drummer "Rakalam" Bob Moses at the New England Conservatory of Music. Transformational.  Walking down the hall for her first lesson she could hear hip hop music reverberating through the classical hallways as she approached the door to his studio. She caught a glimpse of  Rakalam through the tiny window dancing,  grooving and singing out as his student worked it on the drums.  No drum exercises or books in this class. If Rakalam's not moving, you're not grooving! The beginning of a  beautiful relationship and  journey of discovery and transformation. To sum up the essence of Rakalams influence and teaching; Living Music.  Not yet realizing this is exactly what she had been searching for, Audra felt right at home.  So, achieving a formal Master's degree in Jazz Studies was only a by-product of this "unwritten" experience and gift Rakalam offered. Being submersed in an environment of master musicians and teachers, gifted students from all over the world, and the opportunity  to "learn while doing".  It was at NEC that Audra studied and performed with Rakalam; as well as George Garzone, George Russell, Geri Allen, Dave Holland, Cecil McBee, John McNeil, Ran Blake, Alan Dawson, Fred Buda and Jimmy Giuffre, ...as well as all the visiting faculty and students from the Boston area who inspired and motivated one another in an environment that fostered experimentation, thinking outside the box, and most importantly--developing one's own personal style.

Weeks before graduating from NEC, Audra received a call to audition for the Kit McClure Band in NYC. She was immediately offered the gig and moved directly from Boston to New York to work with Kit. This band traveled and performed both nationally and internationally and was Audra's first real experience as a touring musician; always on the road and home for only brief moments at a time. Grateful for that opportunity and experience,  Audra wanted to travel less and work more in the city to immerse herself in the local NYC music scene. She moved to Brooklyn; working as a freelance drummer, as well frequent sessions with local musicians. That time in New York was 'Real Life' post Graduate School' to say the least.

Audra was blessed with an amazing husband and two amazing children and along with those blessings came some life-altering changes.  For a while Audra moved  back  and forth from Austin to San Antonio as a freelance musician, educator and recording with artist's including  her beloved mentor Dr. James Polk, Rich Harney,  Bobby Meyer, The Nobuko Trio (included an amazing tour of Japan.)  Audra also recorded her first CD as a co-leader with pianist Frank Carlberg.   Prologue (1992) is a result of this piano/drumset duo formed during her time in Boston. Her second CD as a leader/composer Secret World was released in 2004. This quintet recording features tenor sax giant George Garzone and is comprised of Audra's original compositions and arrangements. This was also the period of time when Audra created "Jazz In July Band Camp SA." Building this project from the ground up and using her own resources to get it started, this camp grew into an annual event that allowed local young musicians to be mentored by some of the areas finest musicians and educators. The first of it's kind, (as influenced by Audra's own experience with Max Roach) it was recognized and promoted by local news and radio with live interviews and footage during camp hours. It was a beautiful experience to witness these aspiring young artists being featured in such a way and many have gone on to establish professional careers in music as both performers and educators.
After the birth of her daughter, Audra settled back in San Antonio and realized she had the tremendous opportunity and blessing to be at home with her kids while they were young so traveling and constant late night gigging took a back seat. Audra continued to performed locally and expanded her teaching as an adjunct instructor at Texas State University, St. Mary's University and several community colleges in the area.

During the course of her career, Audra has performed in festivals and concerts with artists such as; Richie Cole, Rufus Reid, Marcus Belgrave, George Russell, George Garzone, Hiro Honshuku, Frank Carlberg, Bob Mintzer, Dave Leibman, Hannibal Lokumbe, as well as her mentor Rakalam Bob Moses. This list of names continues to include so many musicians Audra has had the opportunity to play alongside and learn from. Although the names may not be as familiar, the gifts and talents they possess and share are just as powerful and the experience of knowing them equally influential.

Today, ​Audra is busy composing, performing with her own group, teaching at St. Mary's University and running her own private studio.  She is also an Artist Representative for Vic Firth and participates in clinics and concerts at various schools and festivals in the area. Audra's music is constantly growing and changing and although she is considered a jazz musician/drummer; the entire lineage of her experiences and musical influences holds no boundaries. With an open mind and an open heart she strives to never stop learning and to always allow her music to define itself. 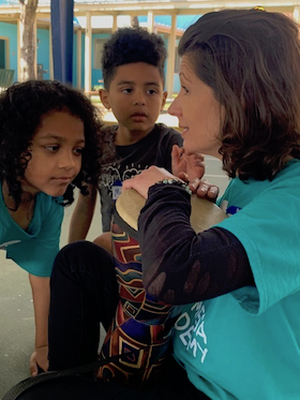